Do you have sperm blockage and want to know the best sperm blockage treatment? In the lack of any sperm in the ejaculate, it is known as azoospermia.

Usually, at least two semen analyses are required to identify and confirm the condition. In the case of a vasectomy, congenital disorders, or an accident, a blockage that prevents any sperm from being delivered during ejaculation is classified as obstructed azoospermia.

According to statistics, obstructive azoospermia accounts for around 40% of all occurrences of azoospermia.

Yes. A tenth of male infertility cases and one percent of all males are caused by azoospermia. Five thousand to seven thousand males out of every fifty thousand attending a game would be infertile, and 500 of those guys would be azoospermic.

Why Does It Happen?

Genetic disorders like Klinefelter’s syndrome, medical procedures like chemotherapy or radiation, recreational drugs like certain opiates, and anatomical anomalies like varicoceles or the lack of one or both vas deferens are only a few of the known reasons.

One possible explanation is that the man has had a vasectomy, which stops any sperm from mixing with the ejaculate. Most of the time, however, azoospermia is probably caused by things like hereditary disorders, poor testicular development as a fetus/child, or environmental poisons, none of which we know much about.

What Should I Do If Azoospermia Was Discovered In A Test Of My Sperm?

Since findings may vary greatly from test to test and lab to lab, the first step, apart from consulting a specialist in male infertility, would be to have a repeat semen analysis from a facility that has a lot of experience with semen and sperm testing.

Having a low sperm count also has profound implications for care and therapy, thus verifying the diagnosis is a priority.

Do We Know Whether This Is A Blockage Issue Or A “Factory” Issue?

Without a doubt, however we do have strong evidence to support this. To begin, it’s important to do a thorough medical examination of the reproductive organs. Moreover, indicators of testicular health may be gleaned from laboratory testing like FSH and inhibin B.

Does A Lack Of Sperm Production Signify Azoospermia?

Certainly not! Though the testis may be producing sperm, there may not be enough for it to be detectable in the ejaculate.

A Testis Biopsy For Azoospermic Men: Yes Or No?

In the past, a biopsy was performed on almost every man diagnosed with azoospermia in an effort to pinpoint the precise source of the condition and rule out any obstructions.

But in today’s medical practise, a biopsy is seldom done by itself. There is usually a high degree of certainty in determining whether or not a man has an obstructive cause of azoospermia.

Testicular dissections for sperm analysis have shown that nonobstructive azoospermia may manifest in a number of ways across the testis. Hypo spermatogenesis (maturation arrest) is a reduction in the generation of mature sperm, and a total lack of sperm precursor cells may be seen in other areas (Sertoli-cell-only syndrome).

As a result, in the present day, doing a diagnostic biopsy does not often alter the final care for men with nonobstructive azoospermia. Microdissection testicular sperm extraction (microTESE) is available for those men who want the highest possible chance of obtaining viable sperm for IVF or other forms of assisted reproduction (ART).

In order to rule out a precancerous condition known as intratubular germ cell neoplasia, a little specimen is often sent for pathological investigation at the time of the microTESE (ITGCN).

The Question Is, “What Therapies Are There?” What’s The Most Effective Treatment?

Of course, the best treatment depends on the underlying cause, but many factors, including the patient’s age and reproductive function, their partner’s age and reproductive function, the results of a physical examination and blood tests, their long-term and short-term family goals, and their financial situation, should be taken into account when devising a treatment plan.

Many possible therapies exist, and they vary according on the alleged causes. Some men with obstructions (or a previous vasectomy) may benefit most from reconstructive surgery. In others, eliminating problematic factors such as pharmaceuticals or recreational substances could be the initial step.

Treating hormonal imbalances may improve sperm production in a subset of males. Surgery to correct anatomical anomalies or varicoceles is a possibility for some men, while for others, attempting to retrieve sperm from the testicle to be utilised in ART is the best course of action. In order to maximise results and sperm retrieval possibilities, these operations should only be conducted by the small number of doctors who possess the necessary training, knowledge, and experience.

Finally, men with azoospermia should constantly keep in mind that numerous couples all over the globe have become parents via donor sperm or adoption, and that doing so has brought them unmatched pleasure and love. These options are perfectly fine for couples to pursue after being examined (more on the importance of evaluation below).

The testes produce testosterone, right? It is possible for a guy to have normal testosterone levels and yet be azoospermic.

Indeed, both of those things are true. The testis contains tiny tubules where “germ cells” develop into sperm. The tubules’ “Leydig” or “interstitial” cells produce testosterone. Unlike germ cells, Leydig cells may survive and continue to function in a testicle that has been injured or is not completely developed.

Why Should Men Who Have Been Diagnosed With Azoospermia Seek Professional Help?

Men who have been diagnosed with azoospermia worry about their ability to father children, but they may overlook the link between infertility and their overall health.

The risk seems to connect with semen and hormonal abnormalities, although investigations have identified severe medical issues (including cancer) in up to 6 percent of infertile men who were previously assumed to be healthy.

More importantly, a specialist evaluation is essential for ruling out potentially life-threatening underlying medical conditions, assisting couples in maximising their chances of establishing the family they desire, and providing guidance regarding risk and screening for medical conditions later in life.

How Do Doctors Go About Collecting Sperm?

A variety of methods exist for obtaining sperm from men with obstructive azoospermia, since there is usually an excess of sperm inside the reproductive systems. Procedures like this include testicular sperm extraction, sperm aspiration, and microsurgical epididymal sperm aspiration.

The decision relies on a number of variables, including the individual’s preferences and those of the reproductive endocrinologists involved. Although there are a number of treatment options for men who suffer from nonobstructive azoospermia, microTESE has the best chance of recovering viable sperm for in vitro fertilisation and intracytoplasmic sperm injection. C

areful dissection of the testicular tubules is required for this treatment, and only a seasoned specialist should do it. This is where sperm-producing tissue is most likely to be located. With this strategy, the testis’s Leydig cells, which create testosterone, and other organs may be protected without compromising sperm production.

I Have A Few More Inquiries; How Should I Proceed?

If you want a personalised assessment or treatment plan, talk to a professional.

Obstructive azoospermia may be caused by problems with the ductal system or challenges with ejaculation, among other things. These are some examples:

If the ducts are absent due to congenital conditions such as CABVD (congenital absence of the vas deferens), which is associated with cystic fibrosis mutations by dysfunction in the process of ejaculation, which may be caused by neurological damage from surgery, diabetes, or spinal cord injury if the ducts are ligated (tied), as in a vasectomy blockages due to trauma or infection 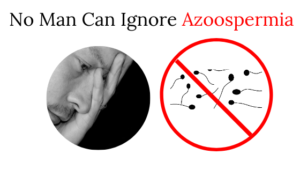 The amount of time that has passed after the man’s vasectomy, the age of the wife, and other confounding circumstances may all influence overall success rates. As reported by the American Society for Reproductive Medicine (ASRM), between 20 and 40% of couples who have a vasectomy reversal may get pregnant without assisted reproductive technologies.

If surgery successfully removes the impediment that is causing azoospermia, couples may be able to conceive naturally, without the need for fertility treatments or assisted reproductive technology.

There are, however, sperm retrieval procedures that may also be used to facilitate conception. Men with azoospermia can father a child with the collection of sperm straight from the testis or epididymis, followed by in vitro fertilization (IVF) using intracytoplasmic sperm injection (ICSI) (ICSI). 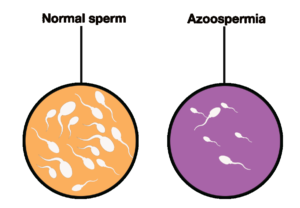 In most situations, ICSI (in vitro fertilization with a single sperm, performed by an embryologist) will be needed to fertilize the eggs since recovered testicular sperm does not contain a sufficient quantity of motile sperm to allow IUI or IVF without the assistance of an embryologist.

In many cases, surgical intervention may unblock tubes in the reproductive system or re-establish connections that never formed as a result of birth abnormalities.

Our specialists are well trained in the subtle procedures necessary to cure obstructive azoospermia, which will allow your sperm to flow freely again. Research obstructive azoospermia to better understand it. There is always something else you can do if surgical reconstruction isn’t an option for you or if you choose not to go through with it. Professional sperm collection from our lab is possible with:

If you need assistance deciding, our experts can sit down with you and go through all of your alternatives. There are two forms of surgery that can be performed if it comes to that: microsurgery and endoscopic surgery.

Microsurgery has been used successfully for many years. Our doctors have completed specialised fellowship training—an extra year of schooling—to carry it out. While operating:

Infertility Is Caused By Blocked Sperm Passageways And Endoscopic Treatment

A smaller incision is made during endoscopic surgery, making it a less invasive treatment. While operating:

How Is A Blockage In The Tubes That Transport Sperms Treated?

How about a diagnosis of azoospermia? Irregular sperm development is a form of male infertility. Azoospermia may be caused by a number of different issues, but one of them is a blockage in the epididymis.

The epididymis is an essential component of a man’s reproductive system because of its close proximity to the testes. The vas deferens run continuously through the tail, which connects to the top expanded section (the head). It’s a short, skinny tube that winds around the scrotum for around 20 feet.

This duct’s primary role is to deliver sperm to the ejaculatory system. When a man has epididymis obstruction, a cyst or other blockage prevents sperm from reaching the ducts so they can fertilize an egg. It is possible for the ejaculatory ducts to get obstructed as well. Let’s check out what brings this on, what signs it shows, and how we may treat it.

Surgery is an option for patients with obstructions in the epididymis or ejaculatory ducts. Some of the procedures that should be performed are as follows:

If you’ve already had a vasectomy but have changed your mind about having children, you may get your vasectomies reversed.

Infections and other mysterious causes of blockages are surgical candidates. Following the removal of the obstruction, the vas deferens is surgically reconnected to the epididymis.

In this operation, the vas deferens are reconnected after the obstruction has been removed surgically.

Ejaculatory duct blockage is unusual. Surgery known as TURED is advised for patients in this situation.
In vitro fertilization (IVF) may be performed by surgical means, however, sperm retrieval is an option that some physicians may suggest as an alternative.

The process involves taking a sperm sample from the man, fertilizing an egg in a petri dish, and then implanting the resulting embryo into the uterus of a willing female.