People who have a penis may opt to temporarily or permanently block sperm from escaping when they ejaculate. So, Why My Sperm Doesn’t Come Out With Pressure?

Others may be suffering from a medical issue that stops sperm from leaving the body. In this post, we’ll look at why individuals block sperm, if there are any negative effects, and whether it’s time to contact a doctor about ejaculation problems.

People may be born with a disease that stops sperm from leaving the body, or they may choose to restrict ejaculate for a variety of reasons, whether temporary or permanent.

Blocking sperm on purpose during sex 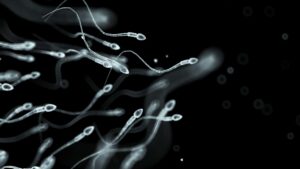 With edging, a person achieves a degree of sexual excitement that leads to orgasm. They then limit stimulation to avoid orgasm, then enhance it to re-create orgasm. They can keep going till they want to climax.

Retrograde ejaculation is a condition in which sperm enters the bladder rather than exiting the body after orgasm.

Among the symptoms are:

To treat retrograde ejaculation, doctors must first address the underlying cause. Pseudoephedrine, a drug that may help in certain circumstances, is one example.

Retrograde ejaculation is not hazardous to one’s health, but it does have an impact on fertility. For those who desire a biological child, retrieving sperm from urine for fertility treatments may be a possibility.

What happens in the body when a person blocks sperm from coming out?

The testicles produce sperm, which exits the scrotum through a tube known as the vas deferens. During ejaculation, sperm and semen combine and exit via the urethra, a canal in the penis.

Semen includes around 10% sperm, with the remainder consisting of:

If sperm does not leave the body through ejaculation, the body breaks it down and absorbs it. The sperm may also be released during nocturnal emission, sometimes known as a wet dream.

When a person has a vasectomy, their sperm stays within the body and does not combine with the sperm. The testes continue to generate sperm, but it is reabsorbed by the body.