Bleeding is one of the most common symptoms of hemorrhoids, but now the question appears Should I Go To The Doctor For A Hemorrhoid? Hemorrhoids are enlarged blood vessels in the anus and rectum.

Many individuals are unaware they have hemorrhoids until they bleed, become unpleasant, or begin to cause pain.

Bleeding hemorrhoids may cause a lump around the anus that can be felt during wiping. Hemorrhoids that bleed commonly happen after a bowel movement. After wiping, a person may see traces or streaks of blood on the tissue. At times, small quantities of blood may be seen in the toilet bowl or in the stool itself.

Blood from hemorrhoids is often bright crimson. People should see a doctor if they notice darker blood since this might signal a problem further up in the gastrointestinal system. 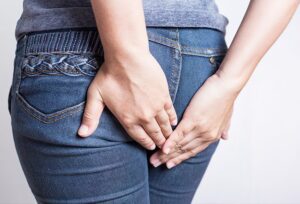 Other hemorrhoid symptoms are as follows:

The pressure surrounding tissues may cause a thrombosed hemorrhoid to burst and bleed as it expands.

Blood from a thrombosed hemorrhoid is usually black and clotted. They are often very painful, and they almost always need medical attention.

If a person loses a tiny quantity of blood and their symptoms are minor, they may treat the hemorrhoids themselves.

Some examples of home cures are:

Bathing in a tub or taking sitz baths: A sitz bath is a little plastic tub that fits over the toilet seat. Two to three times every day, a person fills the tub with warm water and sits in it for approximately ten minutes. This may aid in the relief of hemorrhoid discomfort and inflammation.

Applying ice packs to swollen regions for 10 minutes will help relieve hemorrhoid discomfort and inflammation. Delaying bowel movements: When a person feels the need to go, they should strive not to put it off. Waiting might make feces more challenging to pass and can aggravate hemorrhoids. 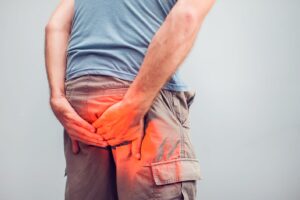 Increasing your fiber and water intake: This softens your feces and makes passing easier. Hemorrhoids might heal if you strain less during bowel motions.

According to a report published in the journal Clinics in Colon and Rectal Surgery, hemorrhoids are the most prevalent reason patients seek assistance from colon and rectal surgeons. The following are signs and symptoms that a person should visit their doctor as soon as possible:

According to an article in the journal Clinics in Colon and Rectal Surgery, a thrombosed hemorrhoid should preferably be removed within 48–72 hours of symptoms first emerging.

How do you know if you have hemorrhoids or something more serious?