Are you facing an issue regarding male infertility? Do you feel like sperm is blocked? Have you ever thought about Ejaculatory Duct Obstruction? If you’re curious about the causes and consequences of clogged sperm ducts and how they relate to infertility in males, keep reading.

There is no need to worry; we have you covered. Why? It’s because that’s precisely what this study is trying to do This article will go into every aspect of it in great depth. Let’s get this party started if this sounds interesting to you!

Unprotected sexual activity results in infertility in around one-third of all couples. Both men and women may be affected by infertility, which various circumstances can cause. More than a third of all infertility cases are caused by a criminal. Most of the time, this results from issues with sperm production or delivery.

To produce healthy, mature sperm, there are several factors at play. Many circumstances may hamper the process of sperm cell growth. Many variables, including genetics and the environment, might hinder sperm from reaching the egg. Fertility may be affected by the temperature of the scrotum. The following factors most often cause male infertility: 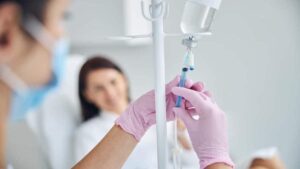 Sperm production and growth are the most prevalent causes of infertility. Sperm may be used for a wide range of things, from:

Inherited characteristics may cause sperm issues. Men’s sperm counts might drop as a result of unhealthy lifestyle choices. Sperm counts may be affected by smoking, consuming alcohol, and taking certain medications, such as antidepressants.

Low or no sperm production might be the consequence of reproductive system damage. About four out of every ten men with a total sperm shortage have a blockage in the tubes that the sperm travels through (azoospermia). An illness or a congenital abnormality might cause a blockage. Sperm might become stuck in the pipes on their way to conception. It may be caused by repeated infections, surgery, edema, or developmental difficulties. Obstructed parts of the male reproductive system include anything from the testicles to the testes themselves. During ejaculation, sperm from the testicles are unable to leave the body.