Everything You Need To Know About Non Obstructive Azoospermia

NON-OBSTRUCTIVE AZOOSPERMIA (NOA) is the most severe type of male infertility, characterized by an absence of sperms in the ejaculate as a result of the inability of spermatogenesis to take place. In layman’s terms, sperm production has been hampered.

Azoospermia (a-zoo-SPER-mee-ah) is a common cause of male infertility in which there is no detectable sperm in a man’s ejaculate (semen).

Normally, sperm is produced by the testicles in a man’s scrotum. Sperm travels through the male reproductive system, combining with fluid to make semen. The thick, white fluid discharged from the penis during ejaculation is known as sperm.

Azoospermia affects 5–10% of males who are assessed for infertility.

The disorder might be present from birth or emerge later in life. Stanford Health Care is a pioneer in the treatment of azoospermia and sperm extraction. To assist our patients to regain fertility, we develop a highly individualized therapy strategy.

What Is Non-Obstructive Azoospermia?

The most severe form of male infertility is nonobstructive azoospermia (NOA), which is defined as no sperm in the ejaculate due to spermatogenesis failure.

NOA is caused by either intrinsic testicular dysfunction or insufficient gonadotropin production.

Because of the relatively high occurrence compared to the general population, chromosomal or genetic abnormalities should be examined.

Although rare, NOA caused by insufficient gonadotropin production is a disease that can be remedied with medical therapy. In contrast, for the most majority of NOA patients, there is no therapy that can restore spermatogenesis.

As a result, testicular sperm extraction under an operating microscope (microTESE) has been the primary line of therapy for these individuals.

Other therapeutic options for NOA individuals with palpable varicoceles include varicocelectomy and orchidopexy if undescended testes are discovered after maturity, however care of these patients remains contentious.

MicroTESE has made significant progress in recovering spermatozoa more effectively during the last decade. Furthermore, recent scientific developments have boosted the prospect of employing germ cells derived from stem cells in the future.

This review summarises current research on the genesis, diagnosis, and management of NOA.

It is believed that insufficient gonadotropin production or intrinsic testicular dysfunction are the primary reasons for failed spermatogenesis. There are a variety of variables that contribute to this failure and the subsequent NOA, including:

Non-obstructive azoospermia can be caused by a number of hereditary reasons of male infertility. Y-chromosome microdeletions and karyotypic abnormalities are examples of this.

Klinefelter Syndrome is the most frequent karyotypic aberration, and it arises when a man has an extra X chromosome. Up to 10% of non-obstructive azoospermia individuals will have identifiable genetic defects that result in reduced sperm production.

Although not all genetic reasons for reduced sperm production are known, it is a topic that we are studying and keeping an eye on. It is critical to understand:

Causes that are recognized and diagnosable might assist guide your therapy, with certain illnesses having a higher possibility of detecting concealed sperm than others.

Because you risk passing genetic mutations on to your offspring, our genetic counselors can assist you in making those critical decisions.

Pituitary hormones must stimulate the testicles in order for them to create sperm. Sperm production is impossible if these hormones are deficient or absent. Men who use or have used steroids may have influenced the hormones required for sperm production.

Toxic substances including heavy metals, chemotherapy, and radiation therapy can all reduce sperm production. For this reason, sperm banking is suggested prior to chemotherapy or radiation treatment.

Some hazardous substances (with possible links to pesticides)

Certain drugs might also have a detrimental impact on sperm production. Taking testosterone supplements, for example, can interfere with the natural operation of the reproductive system.

Several drugs can impair sperm production, so we can advise you on which, if any, you should continue taking. While testosterone is required for optimal reproductive function, taking it in supplementary form can frequently result in azoospermia.

Veins in the scrotum can expand and spread, causing a varicocele and interfering with normal sperm production. Our partner, the Male Reproductive Medicine and Surgery Program, can teach you more about varicocele management.

Deletion of the Y Chromosome

Many genes on the Y chromosome are required for sperm production, however, some men are missing important portions. Because Y chromosomal deletions are responsible for up to 10% of azoospermia cases, we carefully test for this possibility. In fact, one of our advisers, Dr. Renee Reijo Pera, was the first to recognize the significance of these genes in sperm development.

The identification of a specific Y chromosomal abnormality is critical because some deletions (for example, AZFc) increase the probability of discovering sperm.

Any sons born to Y chromosome deletion dads will inherit the condition.

Men typically have 46 chromosomes: 44 pairs numbered 1 through 22, plus an X and a Y. However, up to 10% of individuals with nonobstructive azoospermia have identifiable abnormalities that might decrease sperm production.

Klinefelter syndrome is caused by an extra X chromosome and is characterised by poor testicular function, low sperm counts, and low testosterone levels. In such circumstances, however, we are frequently able to find some sperm.

It is likely that your azoospermia is caused by a hormonal imbalance, which we may address.

Men suffering from NOA may now be able to witness the restoration of sperms in their sperm thanks to advancements in technology and medical treatments. Some men have pockets of sperm production in their testicles, which may be detected in their testicles. 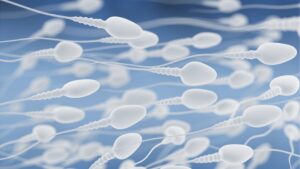 Hormone treatment can be an effective strategy to address hormone shortages in males with non-obstructive azoospermia.

Toxin avoidance and medication adjustments with the assistance of a physician can also result in increased sperm counts.

There is contradictory evidence on whether varicoceles should be surgically repaired.

Varicocelectomy, which involves tying up the problematic veins and rerouting blood flow through healthy veins, can help decrease swelling of varicose veins but is normally reserved for severe instances.

Some men with nonobstructive azoospermia may have sperm return to their sperm as a result of our sophisticated therapies, making unassisted pregnancy a viable possibility.

Many others have patches of sperm production in their testicles, even though many parts are barren and their patients do not produce enough to transmit via their reproductive tracts.

Such result is attainable due to our sperm extraction knowledge and competence.

Your doctor will discuss your unique situation with you and give treatment recommendations.

For some guys, the cure is simple: adjust their lifestyle, switch medications, or begin avoiding particular poisons.

Also, if you’ve had chemo or radiation therapy, your reproductive system is quite resilient—your body just needs time to recuperate.

However, we may also suggest a more direct action. In any event, you must let your body 2-3 months to produce enough sperm to observe a visible improvement.

Some men with nonobstructive azoospermia benefit from therapy with particular hormones, which encourage sperm back to their sperm or increase the chance of finding sperm after extraction, depending on their current levels. Among these hormones are:

Varicoceles are swollen and expanded veins on the scrotum that might obstruct sperm production in some men. We utilize an operating microscope to detect and tie up the problematic veins while conserving vital surrounding tissues during a microscopic varicocelectomy (e.g., arteries, vas deferens, lymphatic channels).

When it comes to diagnosing NOA, a physical examination is essential. SOI offers the skills and resources necessary to diagnose NOA and adapt your therapy to your specific needs. The staff at SOI has been assisting men with NOA in achieving biological parenthood for many years.

Previously, fertility specialists believed that men who had sperm production issues could only have a family with donor sperm or via adoption.

However, sperm has been found in testis biopsies taken from males with non-obstructive azoospermia. Despite their reduced motility, testicular sperm can be utilized for intracytoplasmic sperm injection (ICSI) during in vitro fertilization (IVF).

For men with non-obstructive azoospermia, a surgery termed testicular sperm extraction (TESE) with ICSI has been performed.

Extraction of testicular sperm can be done under local or total anesthesia. The sperm obtained through this method can be used in IVF operations.

If a man has a genetic reason for his non-obstructive azoospermia, genetic testing and counseling are indicated before attempting IVF.

How Non-Obstructive Azoospermia Is Diagnosed?

We understand that a diagnosis of infertility can be extremely upsetting for many guys. However, effective azoospermia therapy begins with diagnosing the aetiology.

Sperm is normally created in the testicles (testes) of your scrotum and goes through your reproductive tract to combine with fluid in the seminal ducts. This results in semen, which is the thick, white fluid expelled from the penis during ejaculation.

Up to 2% of the world’s males have no detectable sperm in their sperm, with azoospermia accounting for up to 10% of male infertility cases.

The condition, which is commonly referred to as “no sperm count,” is either present at birth or develops later in life. We conduct a thorough assessment to determine the root cause of your issue.

Doctors have the knowledge and equipment necessary to detect both kinds and adapt your therapy accordingly.

The idea is to fix the problem so that the simplest (and frequently least expensive) kind of conception is possible—though the specific technique is up to you and your partner. In general, you’ll need:

To accurately diagnose azoospermia, two sperm samples must be taken at separate periods to allow for natural variability. You may either drop off the sample at our office or bring it in, as long as:

We ask that you stop from ejaculating two to five days before donating the sample, regardless of technique, so that your body can replace whatever sperm it is making. At least one test is performed on the sperm samples:

You may discover that you have an unusually low number of sperm (oligospermia) rather than no sperm at all after your diagnosis. In some circumstances, you may be sent to our Male Reproductive Medicine and Surgery Program for treatment.

Your diagnosis may also include the following:

Because there is presently no medication that can restore spermatogenesis in the majority of NOA patients, the micro test remains the basis of NOA treatments.

Because of the relatively high occurrence of such anomalies in NOA, chromosomal and genetic testing should be undertaken in these patients, and adequate counseling about these problems should be offered to couples.

Despite several attempts to develop a better sperm retrieval system using micro test, patients have no alternative choice for having their own children if spermatozoa cannot be recovered.