Hemorrhoids can be a painful disease, and most patients ask us When Do Hemorrhoids Require Medical Intervention? that’s why we have decided to address this issue once at all.

When it comes to discussing your hemorrhoids with others, including your doctor, it may be a humiliating experience. However, according to the National Institute of Diabetes and Digestive and Kidney Diseases, hemorrhoids are prevalent and afflict 5 percent of individuals in the United States annually, with most cases occurring in women.

According to current estimates, as many as three out of every four individuals will develop hemorrhoids at some time throughout their lives.

Anorectal hemorrhoids are swelling, bulging veins that develop in the lower rectum and anus, which is part of the anorectal area of the body. Your hemorrhoids might be caused by:

They may, however, bleed, resulting in bright red blood appearing in the toilet bowl after a bowel movement has completed.

Even though hemorrhoid symptoms might vary, they can be painful for some individuals. Mainly if you acquire a thrombosed hemorrhoid, also known as a hemorrhoid clot, you should seek medical attention. Getting therapy for your hemorrhoids as soon as possible may help to alleviate some of the pain and suffering.

At-home therapies have shown to be effective for many persons suffering from hemorrhoids. However, you may be wondering whether hemorrhoids become severe enough to warrant medical attention. This depends on your symptoms. Among the hemorrhoid symptoms that may be alleviated by medical intervention are:

It is never a good idea to ignore rectal bleeding. However, although hemorrhoids are a frequent cause of bloody bowel movements, rectal bleeding may also indicate a more severe gastrointestinal ailment, such as colon cancer or inflammatory bowel disease, which should be addressed immediately.

Leaving your internal prolapsed hemorrhoid untreated might result in it being stuck outside the anus, causing substantial discomfort, itching, bleeding, and pain. 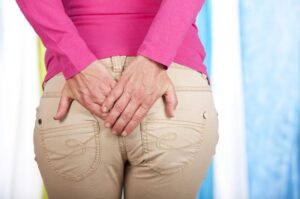 You may feel you cannot empty your bowels when you have a prolapsed internal hemorrhoid. Because of the misplaced toilet paper, you may also have mucous discharge or difficulty cleaning yourself after a bowel movement.

These symptoms might be unpleasant, but they are readily alleviated with medical intervention.

Pain that disrupts your daily life

Give us a call if your hemorrhoids make it difficult for you to sit or have a bowel movement. We can provide you with the assistance you need. When we can give therapies that improve your hemorrhoids and ease your suffering, there is no excuse for you to suffer in silence.

Medical treatment for your hemorrhoids

The kind of hemorrhoids you have and the symptoms you are experiencing may influence the therapy we propose.

In the beginning, we may recommend lifestyle adjustments to help your pain, such as increasing your intake of fiber and water to promote bowel movements and sitz baths to relieve pain and discomfort throughout your procedure.