Walking, running, and exercising are daily parts of our lives, but what if you have hemorrhoids? Does walking irritate hemorrhoids? You asked.

Hemorrhoids are painful, and we know this better than anybody. Many individuals wonder whether they should alter their workout program or forgo it until their hemorrhoids are cured, and their pain subsides.

Walking should not worsen hemorrhoids under normal conditions. Preventing additional discomfort with self-care techniques like wearing breathable and comfortable underwear.

Read More: Should you push a pile back in?

Is it true that walking aggravates hemorrhoids? The contrary is usually valid for hemorrhoids due to the advantages of walking for healing:

No. Hemorrhoids may worsen due to physical activity; however, walking is unlikely to cause any discomfort.

Read More: What is the best way to sleep with hemorrhoids? 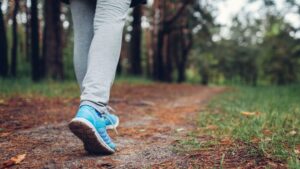 The ideal situation is that you don’t have to stop working out. Aerobic activity (such as walking) aids in hemorrhoid healing by increasing blood flow to the afflicted region, providing essential oxygen and nutrients.

If you’re looking for a low-impact workout that you can perform at your leisure, consider walking as an option.

What about running with hemorrhoids?

Jogging is a way of life for those who like it, so missing out on a few weeks of running is a huge pain.

While running may be safe for those with mild to severe hemorrhoids, avoid aggravating the condition by causing further swelling or discomfort.

Running may aggravate more severe hemorrhoids because of the bouncing of swollen tissue and the chafing that occurs in the region.

Pay attention to pin when exercising with hemorrhoids

In addition to the discomfort mentioned above, jogging with hemorrhoids may cause the afflicted region to become bloated and uncomfortable.

Swimming or strolling could be a good option if you’re concerned about the amount of friction in the region.

Exercise may aggravate hemorrhoids, so you felt discomfort when you first realized you had a hemorrhoid problem.

What is the best way to sleep with hemorrhoids?